What is a tree anyway

A tree is an undirected graph that satisfies any of the following definitions:

Stuff we have to know 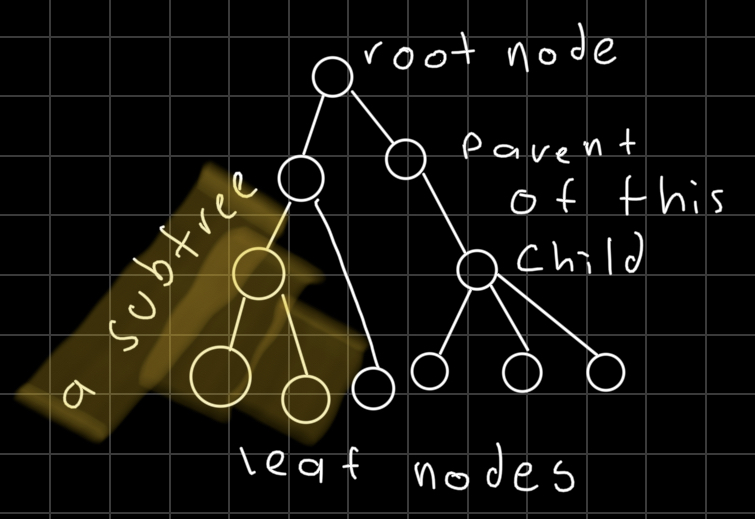 This is what the class that we will be using as node looks like (setters and getters omitted).

A common theme is that we are going to have a public method and a private method. If rootNode is null then it means that the tree is empty and we just set that new value as the root node of the tree.

If the root node already exists we call our private insertion method.

If we find a leaf node then we set the new node as the child, incrementing the length of the tree and returning true to signify that the insertion was successful.

This implementation of the BST wont allow for duplicates, if we find one we return false.

This method will let us know if a value is present in our BST, we have a public method that receives the value to look for:

And we have a private method that goes inside the tree looking for the value.

In the public version of remove we receive the value to remove, we save the current size of the tree and then we call the recursive private version, if the new size is different then it means the value was removed.

The recursive removal is very interesting, as we traverse the tree the recursive method also returns the correct child for the parent node. For example if we are going inside the right sub tree we do:

If we never find the value we want to remove we are just re-setting the children of the nodes we are traversing, but if we find a match we need to account for three cases.

For the first two cases we just return the opposite child, for example this is the case where the left child is null:

This also handles the case where we have a leaf node, for a node with a right child we would return the left child.

The last case, where a node has both children is tricky since we have to find a node that complies with the BST invariant.

There are two ways to ensure we comply with the BST invariant we can either find the leftmost child of the right node or the rightmost of the left node. In this implementation we go for the leftmost node of the right child using the following method:

After that we copy the value to the node we are removing and then go inside the subtree in order to delete the node, since its the leftmost node we know that is going to fall in the case of a removal of a leaf node.

This is the complete code for the remove method.